According to Edmodo’s “End of Life FAQ“, Edmodo will be deleting all data.

This is a very good thing.

Back in 2015, I asked what tech company would be the next ConnectEdu. It’s looking like that dubious honor could go to Edmodo.

As a brief reminder, ConnectEdu offered college planning tools to high school students – they had a service that was directly comparable to Naviance (and we all know that data on students attending college is valuable). ConnectEDU had records on 20 million students. When ConnectEDU declared bankruptcy, the FTC stepped in and tried to block the sale of student records. However, because ConnectEDU had no employees on staff to delete the data, the FTC’s order was not followed, and the data was sold.

Yesterday, Edmodo announced that they are going out of business on September 22, 2022. 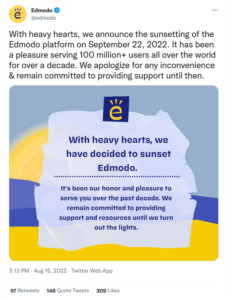 Of course, you won’t know this from Edmodo’s home page: 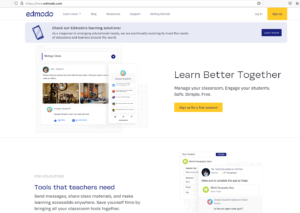 And you won’t know it from Edmodo’s blog (both screenshots taken the morning of August 16, 2022): 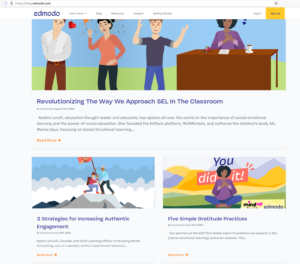 But this gets us to a core question: what happens to the data Edmodo has collected on over 100 million people going back over 10 years?

Edmodo’s privacy policy is pretty clear: data is an asset, and it can be sold or transferred.

If Edmodo or some or all of its assets were acquired or otherwise transferred, goes out of business or enters bankruptcy, user information may be transferred to or acquired by a third party. Any such third party will be subject to the same commitments for previously collected Personal Information and Children’s Personal Information under this Privacy Policy. We will notify you in advance should any business transfers occur.

With 100 million users over ten years, it’s a near certainty that some of the children who were required to use Edmodo will grow up and be politicians, business leaders, or people with important decision making responsibilities. There are almost certainly some data gems in there, waiting to be processed, mined, and stored until some future time when they might have value. Storage is cheap; processing is simple, and the data could be made available to multiple buyers as the owners of Edmodo look to gain as much money as possible from the assets held by the company.

The ethical and responsible thing would be for Edmodo to destroy the data, and publicly document that they have destroyed it. This should be the default. Even if Edmodo offered deletion as opt-in, how would a company winding down operations be able to manage deletion requests? If just 1% of Edmodo’s claimed users made a request, that’s a million requests that would need to be processed in a month.

As a parting thought, what is happening with Edmodo happens with edtech companies on a regular basis. Most of the time we don’t hear about it (or we don’t think about it), but every merger, sale, acquisition, and bankruptcy sends data floating between companies, and the subjects of that information have no idea this has occurred. This is what happens when we outsource core educational functions to third parties